There's still a chance that I mught be using this book as a textbook for a GN-related course next Autumn, so I'm happy to start stockpiling some reviews.
Posted by Bucky C. at 1:23 PM No comments:

...focusing on the Japan-US alliance. Click the link embedded in this post's title to see the government-sponsored book and even download a copy!

The military has a long history of using comics to educate citizens and troops. This latest effort adds to that legacy. Of course, any time a government seeks to educate, issues of "education" vs "propaganda" are going to arise....
Posted by Bucky C. at 1:11 PM No comments: 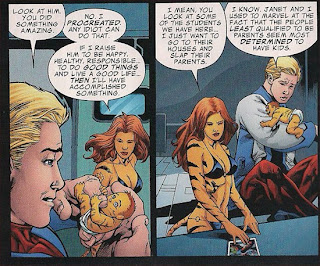 I gotta say, I think Incredible Hulks and Avengers Academy are the best two superhero comics series on the market.
Posted by Bucky C. at 9:04 PM No comments:

Karen Green's Cool Write-Up of a Classroom Conversation Re: *300*

Not Everyone Passes My 3349 "Dramatic Modes of ELA" Course. Just Ask Hitler...

Luis Alberto Urrea's story of the magical Mr. Mendoza, a leathery ancient in the town of Rosario, MX, who uses his paint brush to inspire, confound, and challenge the morality of the locals, is an example of a graphic novel that represents Mexican/Mexican American writing and artistry at its finest.

The magical realism that permeates and defines so much of Latin American writing is apparent; the mythos of mystery in events and places that otherwise seem mundane is clear; religion and local color folklore entwine throughout the narrative appropriately and without seams, and Christopher Cardinale's artwork is exquisitely palpable.

The woodcut-esque textures and hatches of the drawings don't just offer an aesthetic sensation of "feeling," but an actual sense of touching, of smelling, of hearing and tasting. Everything looks and feels like burlap, like stone, like the skin of the elderly or the smell of fresh milk, or the heat of summer.


One reads this book and its art and has every sense heightened and ever sense of sense stimulated.

But as soon as we are introduced to Rosario's iconic artist and his influence on the two young leads, he leaves everyone, walking on a stairway to the stars, with readers and townsfolk alike left to ponder the components of his pigments, or, if the graffiti on the back end of that mule on the last page is to be heeded, if we've gotten too wrapped up in the telling, fooled by the planted and tilled mysticism of a story with a reality too ordinary to leave alone.

The Kirkus Review has mentioned Mr. Mendoza's Paintbrush as one of the best graphic novels of the year. It's hard to argue against the claim.
Posted by Bucky C. at 2:08 PM No comments:

And since graphic novelists George O' Connor and Barry Deutsch were presenters, I can mention it here!
Posted by Bucky C. at 12:50 PM No comments:

Offering yet another reason for me to repost this not-for-kiddies tribute video:

I know him from Ghostopolis, but Katie covers his oeuvre in this great interview for Graphic Novel Reporter.
Posted by Bucky C. at 11:10 AM No comments:

The award, which you can learn more about by clicking the link in this post's title, is given to offer attention to “individuals or groups who have furthered the cause of intellectual freedom, particularly as it impacts libraries and information centers and the dissemination of ideas.” It’s “granted to those who have resisted censorship or efforts to abridge the freedom of individuals to read or view materials of their choice….”
Posted by Bucky C. at 11:11 AM No comments: