I just returned from a wonderful time as a guest speaker at the New Hampshire Council of Teachers of English 2008 conference. I met some great teachers and had the distinct pleasure of meeting with Diane Weidenbacker's students, all of whom have recently read Deogratias: A Tale of Rwanda and have created their own very moving sequential art narratives.

For a possibly clearer visual, visit this link: http://www.archive.org/details/NhcteTalk08GraphicNovels

As promised to the NHCTE crowd, here is a version of my presentation with full voice-over. Thanks, NHCTE!
Posted by Bucky C. at 4:27 PM 1 comment:

In her online column over at comixology, Kristy Valenti is trying her darndest to use some methodology to tackle the issue of gender differences when it comes to reading comics.
Posted by Bucky C. at 11:27 PM 1 comment: 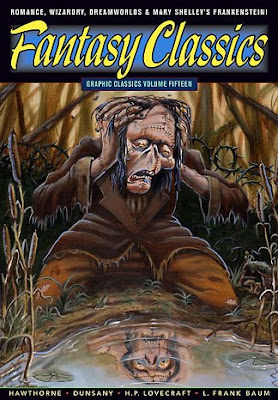 Eureka Productions is pleased to announce the publication of FANTASY
CLASSICS, the fifteenth volume in the GRAPHIC CLASSICS® series of comics
adaptations of great literature.

FANTASY CLASSICS is available in bookstores, comics shops, or direct from
the publisher at http://www.graphicclassics.com
Posted by Bucky C. at 11:02 AM No comments:

Thanks to Lance Eaton for sharing some great information about wowio. This online site offers readers the opportunity to download pdf versions of all sort of texts, including graphic novels and comic books. There is a registration process and a limit to how much one can download per month, but it is completely free. Sponsors make sure all the right people are paid, so you can download and read guilt-free.

By selecting "comics and graphic novels" in the browse function, I was transported to a page where I could view selections by title, genre, age, or publisher. Under "genre" there was even a special section for comics produced for educational purposes. Other categories included "religious," "myths and legends," and "historical fiction."

So for months now I've had this store of comics stories in which AIDs is featured in one way or another, with the idea being that I'd eventually post them as a tribute to one of my favorite graphic novels, Judd Winick's Pedro and Me, in which roommates on a popular reality television show learn to live with and love a fellow cast member, Pedro Zamora, who is HIV positive and ultimately succumbs to AIDs-related illness.

Well, National AIDS Awareness Month isn't until October (I thought it was in April, for some reason), but I just can't wait any longer.

As I've often said, the sequential art format offers many rich examples of texts engaging in sociocultural and sociopolitical issues. Pedro and Me may be among the best-known graphic novels to deal explicitly with safe sex and AIDS, but it's hardly the only one. Below is a list of other titles or stories that do the same, and I encourage anyone to post other examples that they may know. (There may be some overlap in the titles mentioned below from various sources).

Thanks to Andy Mangels (see http://www.andymangels.com/and http://www.wonderwomanmuseum.com/) for the following timeline of other AIDs-related comics, apparently created originally for Gay and PRISM Comics:

1996• Seven Miles a Second, a graphic novel, and an autobiographical story about a hustler dying of AIDS (DC/Vertigo)

2000• Pedro and Me: Friendship, Loss, and What I Learned, a graphic novel account of author Judd Winick's friendship with the late AIDS activist Pedro Zamora, is nominated for a Pulitzer Prize (Henry Holt)

Andrew L. has offered titles Blue Pills and Lost Raven (buy this one and some of your money goes to the Evergreen AIDS Foundation, according to Amazon.com), the superhero comic Shadow Hawk and Howard Cruse's story "Safe Sex" (most probably from his work in The Advocate magazine).
Posted by Bucky C. at 4:43 PM 3 comments:

One of my new favorite images

Comic Book Resources is reminding us all that February 29 was Superman's 70th birthday. First introduced to the masses in 1938, he's now a super-senior citizen. CBR is asking folks to detail their most visceral Superman experience. I don't really have one. What I respect most about this character is that he tries to be moral, forthright, honest, and self-motivated. He has the power to crush Earth's enemies and the power to vanquish anything that bugs him, really. But he's a study in self-control and genuinely humanist values.

I've been taking some heat from female academics lately for studying comics and graphic novels. They tell me the sequential art form is too dominated by men, that the characters are poor representations of femininity, and that the images and portrayals of women in comics are degrading and immature.

They're right -- to some degree. Often within these bereavements, though, these critics make blanket statements or assumptions: assuming the traits of super hero comics are found in all sequential art, mistaking the commercial comics as the standard bearers of the form, failing to consider that male representation in mainstream comics is often just as immature and exaggerated as is female representation, and assuming that there can be no value in what they see as a flawed form.

I'm unapologetic when I say I actually care and think about issues concerning young men. As the father of two boys, a career educator, and an informed citizen, I read the research and see with my own eyes -- have experienced in my own life -- how we're losing our young men, especially our young men from backgrounds of poverty, to unchecked appropriations of hyper-masculinity via media and possibly media-created or government- spun notions of "culture" and acceptable behavior (all of which which usually boil down to having no real humanist masculinity in them at all).
Knowing this has only increased my respect for characters like Peter Parker, Steve Rogers, and Clark Kent, characters who have the power to do amazingly terrible things, but who have decided that being supermen doesn't mean having amazing powers, but actually means rising above the banality and perversion that can be the animalistic human existence, the one bent on domination, ego, and violence. Superman is the Greek and Neoclassical ideal: Everything in the proper moderation, tempered by reason and logic, and infused with a strong moral core. He's super not only because of his alien powers, but because of how he embodies the best of humanity.

I make a habit of buying my young male relatives a Superman t-shirt at least once in their lives. As I tell my wife, "There's a time in every little boy's life when he wishes he could be Superman." I hope I'm still right, and that we're looking up to Supes for generations to come, not just because he's faster than a locomotive or could hurl our planet into the sun at any moment, but because he embodies potential power filtered through rational thought, a sincere caring for all of humanity, a balanced point of view on all things constituting the human experience, and a resolve to use his potential for the shared benefit of others.

Do I want my sons to grow up looking like Superman? Not especially, but would I be happy if they embodied the best of his character? Absolutely.

Now, I could easily embark on philosophical notions of gender, morals, and humanity here, or I could examine whether or not I'd be just as happy to have a daughter look up to the best in Superman, or I could extrapolate on the commercial character-building process that is the super hero comics' m.o. and thereby say either that it is silly to look up to a character that is the conglomeration of so many influences or suggest that the communal aspect of Superman's creation and continuing development actually supports the notion that "it takes a village" to raise children with good moral cores by showing that our group mentality, our group morality, must come into play when teaching our children right from wrong, what traits are admirable and which are not, or I could berate myself for speaking of a fictional character with such praise.

But, instead, I think I'll simply say "Happy Birthday Superman! And keep doing what you do best: Reminding us that our best selves are the potential super-men (and women) in all of us."
Posted by Bucky C. at 11:33 AM 3 comments: