Support the Hernandez Brothers Collection and Get an Exclusive Jaime Hernandez Print!

You can own an exclusive, frame-quality print from Jaime Hernandez and support a good cause at the same time! A little while ago, Jaime gave me permission to print an extremely limited run of an 8.5x11 black and white ink drawing of  his beloved character Maggie Chascarillo. Only 50 of these exist, 25 on cotton and 25 on textured linen. They're going for $50 each, and they're going fast!


What's more, your purchase not only gives you or the Love and Rockets fan in your life an amazing print from one of the world's foremost comics art masters, but will help support the Hernandez Brothers Collection of Hispanic Comics and Cartoon Art, housed at the University of Texas at El Paso Library (see the post below for information on this collection). That means that your purchase may be tax-deductible! 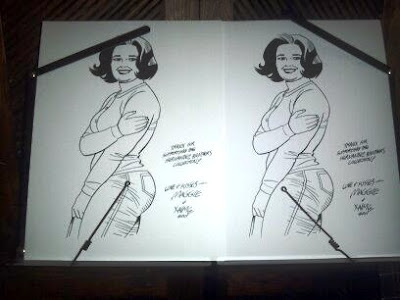 Above is a low-resolution photo of two of the prints, the left on cotton and the right on linen. The text reads, in Jaime's distinctive script, from top to bottom, "Thanks For Supporting the Hernandez Brothers Collection! Love & Kisses -- Maggie and Xaime 2011."

If you'd like to own a print, contact me, James Bucky Carter, at jbcarter777@gmail.com for directions on how to fill out a check and where to send it. Once I get your check, I will number your print and get it out to you within a few days. In time, you should also receive a "thank you" note from the University of Texas at El Paso regarding your gift. The first fifty checks received get the print. Act now before they're all gone!
Posted by Bucky C. at 12:03 AM 4 comments:

About the Hernandez Brothers Collection of Hispanic Comics and Cartoon Art

On February 23, 2010, James Bucky Carter, an Assistant Professor of English Education  in the University of Texas at El Paso (UTEP) English Department, organized the second installment of an event series entitled "El Paso in the Comics" (EPIC).

With generous donations from the English Department, the Dean's Office in the College of Liberal Arts, the Center for Inter-American Border Studies, the Art Department, and the Sam Donaldson Center in the Department of Communication, Carter was able to bring together local comics creators and publishers from El Paso and Juarez to discuss and share their work with the Border community.

The keynote speaker for the second EPIC was Jaime Hernandez, a modern American master of the comics form. Hernandez crafts stories featuring Hispanic and Chicano/Chicana characters trying to find meaning in their lives and cultures. His  work and the work of his brother Gilbert and Mario on Love and Rockets and its connected series of books is considered some of the finest comics storytelling of the 20th and 21st centuries.

In talking with Jaime, Carter learned that his mother and grandmother had ties to the Borderland and discussed the idea of creating a space that would honor the Hernandez Brothers' connection to this region.

The collection, comprised mostly of pamphlet-style comics and graphic novels, is housed primarily  with the UTEP library's Chicano Collection, though various other artifacts are housed where they are best preserved.

PRIMARY GOAL: To collect, spotlight, preserve, and make available to the UTEP community and other scholars resources from Hispanic/Latino/a/Chicano/a comics artists and writers, with “resources” defined as comics, graphic novels, and related artifacts (original art, scripts, associated publications and scholarship), and to collect, spotlight and make available to the UTEP community comics and graphic novels that explore issues related to the Hispanic/Latino/a/Chicano/a experience. An emphasis is placed on comics and associated materials emanating from the Borderland.

SECONDARY GOAL: To collect, spotlight, preserve, and make available to the UTEP community and other scholars resources from comics artists and writers of other Spanish traditions, with “resources” defined as comics, graphic novels, and related artifacts (original art, scripts, associated publications and scholarship).

TERTIARY GOAL: To collect, spotlight, preserve, and make available to the UTEP community and other scholars Spanish-language comics and comics-related resources.

The mission of the Hernandez Brother Collection is to meet the goals set forth above in the long term, and in the short term the mission is to work with companies, corporations, granting entities, artists, and the personnel at other libraries to procure items for the collection, make space for them in the UTEP library, preserve and protect items as necessary, and to display them in the proper manner.
Posted by Bucky C. at 11:21 PM 2 comments: