Who knows what 2015 holds? From this blog, reviews of This One Summer, The Wrenchies, and Bitch Planet #1 (maybe) are in the works. In the meantime, may your holiday season be one of merriment, hope, rekindling of loves and passions, and renewed beneficence to your fellow beings. See you in 2015!
Posted by Bucky C. at 5:41 PM No comments:

A Message from Electric Literature On Comics and Reading

Star Lord and Rocket aren't the only space cowboys who thing comics are serious literature. Regular cowboys think so too, according to this great cartoon from Electric Literature, a site you should check out. 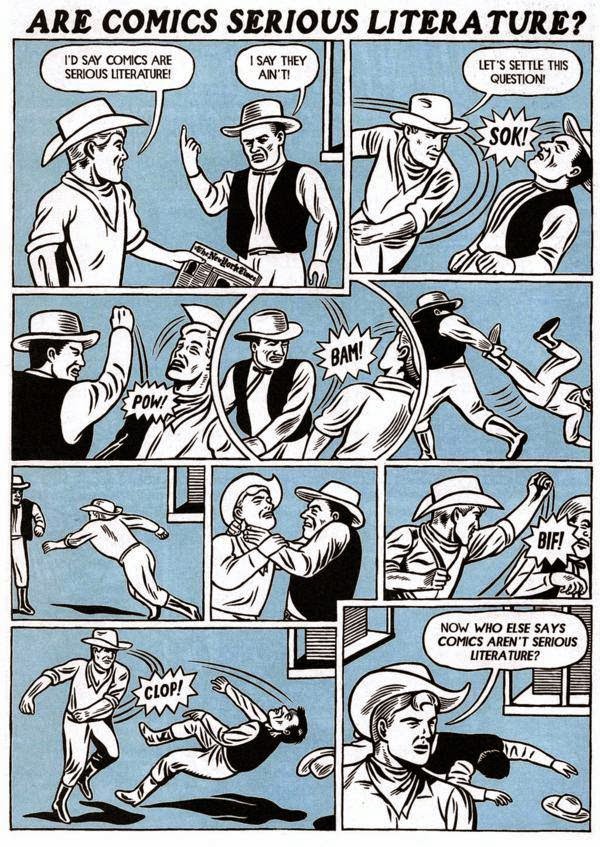 Need a quick holiday gift idea?: Walmart has $5 Marvel Graphic Novels! As well, if you pick up the store's Guardians of the Galaxy-themed trade, you'll see a nod to all of us working in comics and literacy and to all of us who know the power of comics:

El Deafo is the imaginary super-hero persona of young Cece Bell, an upper-elementary student who identifies herself as deaf/hearing impaired. While Cece is shy, anxious about her hearing and how people will view her, exceptionally eager to make friends, and contemplative in her relationships, El Deafo exudes confidence and charm and encourages Cece to take the big chances and see things from alternative, can-do viewpoints.

Perhaps given her super stature, El Deafo earns the eponymous title for the book which details her and Cece's story. But, Cece isn't too far behind. Grown-up Cece is the author!

Endearing and accessible to its intended young audience, El Deafo has a rolling pace which can get tedious after seeing Cece again and again over-analyze things which she can't control. Furthermore, as someone previously corrected after sharing his assumptions about deaf culture and accepted terminology, I worried about the blurring of definitions regarding "deaf" and "hearing impaired," which I'd come to see as a faux pas.

Had I read the short essay after the comic narrative, however, my worries would have been waylayed and my reading experience more enjoyable. For those interested in accepting the book into their classroom collections or gifting it to a reader, reading that section first may make for a less turgid reading experience an is my recommendation. And as for Cece's anxieties, how much more empathy can be built for her by realizing as tedious as those analysis sessions may be for us (but surely made less tedious once understanding Bell's own take on deafness as construct), they must have been torture for a young girl growing up decades ago when people weren't taught to be as accepting of "difference" and when signifiers of such difference took the form of bulky, testy technology?

Cece and El Deafo eventually merge when Cece, who has long framed her hearing in terms of a super power, has her social circle embrace the metaphor on their own -- with hilarious results guaranteed to tickle (or is that "tinkle?") young readers.