A View From My Office 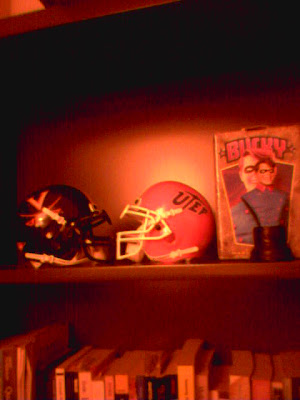 Thanks for the Stiltman for drawing my attention to this feature on graphic novelists in the NY times. That last line by Spiegelman is a classic!
Posted by Bucky C. at 10:18 PM No comments:

3,300. Those are the numbers for graphic novels published in 2007, as reported over at The Beat and ICV2. I've got a NY Times reporter e-mailing me every so often asking me if graphic novel use in the classroom has reached a "tipping point." With numbers like that, representing a 19% rise from last year's numbers and total US sales of $375 million, it appears we're approaching some sort of tipping point.

What I've read about the number is both optimistic and guarded. Many point out the 90/10 rule, reminding us that 90% of anything is garbage. Still, though, if 330 high-quality graphic novels were published in 2007, that's great! It means I've got tons of reading to do, but that's great nonetheless.

The more optimistic folks are pointing to marketing trends and saying that the end of the graphic novel's popularity is yet to be in sight. Some speculate that there will be a bottoming out of the form's popularity with readers, but my guess is it will be more of a leveling off, with numbers of books and readers still higher than they were before they started to rise.

I guess some hardliners will suggest that readers are becoming more and more ADHD, that graphic novels contribute to the dumbing down of the American readership. To that I remember a recent quote from Art Spiegelman, who said there are plenty of smart kids who get comics, and plenty of dumb adults who don't. In a visual age where text and image blur and mesh, the graphic novel is representative of its times, and not necessarily representative of a decline in literacy skills, but of an expansion of them.
Posted by Bucky C. at 2:01 PM No comments: