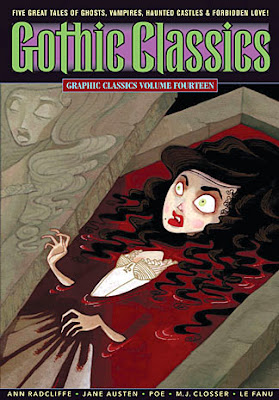 I just got a press release from a company called Eureka Productions, which publishes a series of graphic novels under the Graphic Classics title. It's like Illustrated Classics or the new Marvel Classics we talked about in an earlier post, but the company seems to have a strong taste for the gothic. This is no surprise. Comics scholar M. Thomas Inge once said that Edgar Allen Poe is the literary author most often adapted in comics.

Eureka's newest graphic novel, volume 14 of the series, is an anthology of gothic adaptations of stories from authors like Ann Radcliffe, Jane Austin, and, of course, Poe.
I have to admit that before getting this release, I had no idea this company existed, but since so many of our students share a love of all things spooky, I think this series might be worth checking out!
From the press release: "GOTHIC CLASSICS: Graphic Classics Volume Fourteen is available for schoolsand libraries from Diamond Distributors, Baker & Taylor, Ingram, GumdropBooks and other distributors, in bookstores, or direct from the publisher at http://www.graphicclassics.com."
Posted by Bucky C. at 1:01 PM No comments:

Straight from the blog of current Gallaudet professor and former UVa doc student comes a burgeoning list of deaf characters on comics and graphic novels. Dr. Pajka-West, whom I've known for a few years, is great at gathering literacy resources that intersect with deaf culture and deaf studies, so I hope you'll take a look at her blog and maybe even help her add to her list of characters by visiting http://www.pajka.blogspot.com. Or, go directly to the specific post here.
Posted by Bucky C. at 9:12 PM No comments:

Recent Marvel comics have told the stories of Edgar Allen Poe, and now Marvel is delving deeper into the literary canon by marketing a line of Classics Illustrated-inspired comics. Read a press release here. You might be surprised to learn that I never read many Classics Illustrated titles, though I certainly support their inclusion in a classroom.

Now, should they be used in place of the actual novel or story?

There are some who would see themselves as "purists" who would say no. There are many who want students exposed to the classics.

I say there are many different ways to "expose" someone to the classics. And, I hold to this core belief: a student who is being asked to read something well beyond his or her reading level, thereby being asked to "read" at the frustration level, is asked to accomplish an impossible task.

So, "exposure" is right! That's the very best you can hope for if you're asking students to read a novel that is beyond their reading level.

If a graphic novel/comic book adaptation can expose a student to the story in a more accessible format (note I don't say "easier." The interplay of word and image, the conglomerate layers of text inherent in sequential art, take some skill to read and examine fully), why not have it at least available for student perusal? Read the classic to the class aloud, if it's that important to you.

Of course, some studies have shown that comic books have a pretty sophisticated vocabulary too, so here's more evidence to suggest that it might not be as easy a read as some might think. Best to read the adaptation yourself before placing it in your school library, so you know what you're dealing with, then accept it into your room with confidence.

All in all, I favor other graphic novels over Classics Illustrated-type books, but I fully support the inclusion of these in the classroom as well. If they help teachers accept sequential art, and their students show them how much they enjoy the format, maybe it'll lead to a desire to include original graphic novels in the classroom as well!
Posted by Bucky C. at 10:54 PM No comments:

So, if Free Comic Book Day, the annual event during which comic shops give away tons of freebies and sell many of their items for vastly reduced prices, was THIS weekend, why am I telling you about it now that it is over?

It's simple really. I know a little secret! See, during Free Comic Book Day, your lovable local retailer can only let you pick up one of each free title on display. And why not? He or she has to make sure there's enough to go around, and these events just seem to draw more and more people every year.

That means that the odds of your retailer ordering more stock than he or she can get rid of is very high. You might have only been able to pick up a copy of that great Spidey comic for yourself on Saturday, but if you act quick, you might be able to pick up a class set or two on Monday!

Retailers will be eager to get rid of their Free Comic Book Day backstock if they ordered too much, so take advantage of that. Just ask if they have anything left. I've gotten hundreds of free comics this way.

And, since they've just spent a whole day trying to get rid of some of their other backstock at cheap prices, you may find them willing to negotiate some great deals on other comics they have in bulk as well. They might even get a tax write-off for giving you a deep discount.

It never hurts to ask, so contact your local retailer and see if you can't get a few class sets of some of those freebies, and maybe see if he or she can't help you get some good deals on other comics for your classrooms as well!
Posted by Bucky C. at 12:35 PM No comments: