Typically the comics-and-literacy line has been held by teachers, librarians, and professors, but this Op-Ed from Graphic Novel Reporter takes a decidedly different and refreshing spin: It's written by a high schooler!

Elizabeth Heyman, a senior at Watching Hills Regional HS in Warren, New Jersey, talks about how satisfying she finds reading comics for pleasure and for study.

California Librarians Jack Baur and Jessica Lee have guides up at Graphic Novel Reporter for the following titles:

Harvard University's Center for Middle Eastern Studies is hosting a web discussion on how to consider and use Zahra's Paradise in educational settings. The event starts at 7:00 this afternoon. If you think you might want to register for the event, contact the center via this email: cmesoc@fas.harvard.edu and log in around 6:45.

I hate that I'm going to miss it, especially since I'll be using this new graphic novel in a graduate-level class I'm teaching next semester. Hopefully the recording will be archived, but if you've got the hour available, you might want to listen in -- and participate too!
Posted by Bucky C. at 12:42 PM No comments:

Karen Green is kicking ass and taking names up there in the big NYC. I loves me some Chris Claremont too. So glad to know his papers are now safely archived.
Posted by Bucky C. at 12:24 PM No comments:

It pleases me to see this, as I've gotten mixed reactions about comics scholarship from folks at various Illinois universities. Today, NIU starts a show entitled "Graphic Novel Realism: Backstage at the Comics." Artists such as Joyce Farmer, Jaime Hernandez, Jason Lutes, Mark Newgarden, Megan Montague Cash, Seth, and James Sturm will have work on display. Comics scholar Paul Karasik will be giving a talk tonight. So, if you're in Dekalb, head on over to the NIU Museum of Art.

Glyph Award Nominations Out for 2012

Kazu Kibuiski, Jeff Smith, and Raina Telgemeier were guests on the broadcast that was aired across the nation to school children. Click this post's title to view it! I'm watching it now! :)
Posted by Bucky C. at 12:28 PM No comments:

Big News from Reading With Pictures!

Sousanis's dissertation is in the comics form!
Posted by Bucky C. at 5:07 PM No comments: 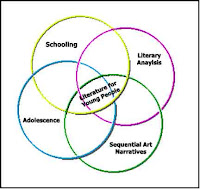 ENGLISH 5340: Literature for Youth is described as "the study of literature written for young people." When I teach it in fall 2012, the focus of the course will be the intersections of adolescence, secondary education, literary analysis and graphic novels.

Students in UTEP's English MAT program will be the bulk of enrollment. We'll be reading comics featuring young people in schooling and social situations. In addition to a core textbook on adolescence and education and articles on comics and literacy, students will be asked to read from among the following graphic novels:

I've just put in my book order and am gathering secondary reading resources now. I'm also working out assignments. But, I'm excited about this course!

What is more exciting to me, though, is that Losh and Alexander are now going public with the news that their upcoming freshman composition textbook, Understanding Rhetoric, will soon be published by Bedford/St. Martin's. I was asked to provide feedback on this project waaaaay back when it was in script form, and did so with much interest.

It's been one of those "it's coming!" points of excitement that I've had to keep on the downlow for a couple of years now, but I'm happy to see that soon the world will know about this text, which should be a major contribution to the comics-and-education movement and to the lives and learning of many students.
Posted by Bucky C. at 11:36 AM No comments:

Life With Archie #16, the issue in which gay character Kevin Keller gets married, has sold out. Not in the bad way, but in the very good way of having all the first printing exchanged for cash. :)

If you missed it at the newsstand, you can download it here.

Also, see the publisher's reaction to that Million Moms effort to boycott Toys R Us stores selling the book.

Daaaaaamn! Archie Comics got some balls! And a big "Hell yeah!" for it, too.
Posted by Bucky C. at 10:47 PM No comments: