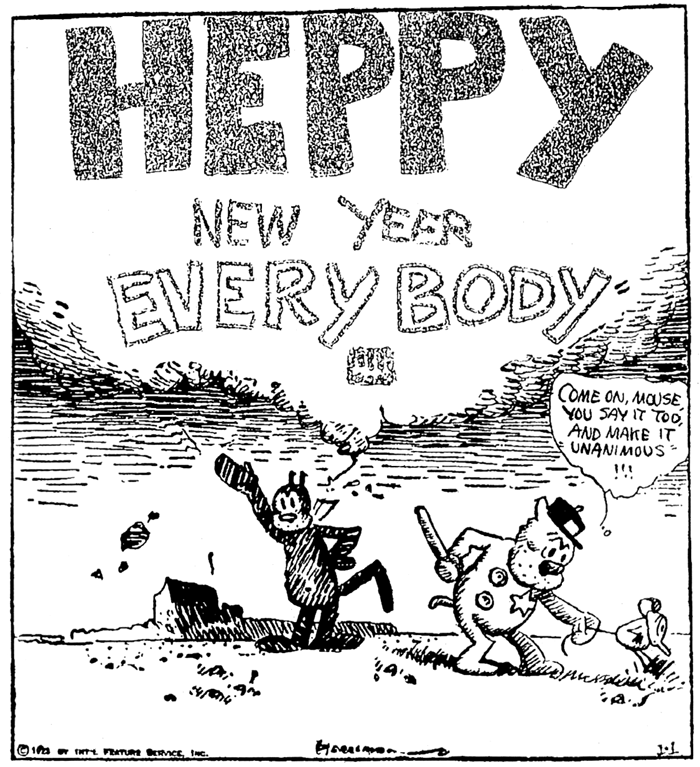 May your back issues be found, your bags unyellowed, your boards crisp and straight, and may your passion for comics benefit you and those around you all  the livelong days of this new year, 2016.
Posted by Bucky C. at 4:38 PM 2 comments:

Two-year old me wishes you a happy holiday season via this groundbreaking rap from Kurtis Blow, whom I wouldn't know about for at least another 20 years but would have wanted you to know about had I known about it then. ;)


The rap reminds me of the time I accompanied my father on a trucking trip through New York State.  I was in fifth grade, if memory serves. I remember Ithaca, Syracuse, and a town called White Plains (?) or White Falls. I remember a complete white out while we were on the road and a deer jumping in front of the cab so high into the sky it was on level with the 18-wheeler's windshield. Luckily it made  it past us! I recall stopping at a shop and getting a brownie almost as big as my head. I remember flipping of someone in a Camaro who almost ran over me. I remember stopping in a drug store and seeing the Todd McFarlane Marvel  Poster Book!

Dad purchased a truck-stop cassette tape of Christmas rap songs somewhere along the way, which we listened to for as long as we could before tossing it out the window! We were harsh critics. I don't think Blow's rap was on the tape.

Noting what appears to be less attention being paid to comics and graphic novels at the recent 2015 National Council of Teachers of English, Assembly on Literature for Adolescent of NCTE, and the Literacy Research Association, I have to revisit the reasons why sequential art may be getting pushed back to the periphery of teachers' and teacher educators' social and critical consciousness.
Luckily, current top burner theory and concerns, namely White Privilege, Social Justice, and White Supremacy offer lenses through which to, once again, make a claim as to why this might be the case:

Around the nation, teachers and teacher educators continue to favor their dominant cultural biases regarding notions of success, quality, and worth. They keep out certain elements such that prevailing discourses and traditions are favored and those with different perspectives remain disenfranchised and under thumb, best seen and not heard -- if acknowledged at all.
Despite all the wonder adding new voices could could add to their classrooms, these teachers maintain the status quo of bigotry and ignorance. Their knapsacks, ironically, are incredibly visible, and very few stand up to them due to the sheer numbers and weight of those who think similarly. Their privilege knows no ends because they privilege one another and can be as radical as they think they are nestled in the safety of their group think.
Miles Myers, Gunther Kress, other New Londerers, Scott McCloud, Theirry Groensteen, Nick Sousanis and so many others have discussed the reasons why, but has anyone called the reason comics and other visual forms remain on the outside looking in of so man English teachers' and English educators' classes?
Let it be so named: The privilege, bigotry and ignorance is the result of :
Write Privilege and Write Supremacy.
Posted by Bucky C. at 12:29 PM 1 comment: