Which is considered the "World's Largest Children's Literature Award" by the awarding foundation. "Large" means "big money" in this case, by the way. So, Shaun, can I have a loan?
Posted by Bucky C. at 4:37 PM No comments:

The Providence Journal gave the conference some love, as did the student newspaper at Rhode Island College, the host site. Click here to see what RIC's The Anchor had to say.
Posted by Bucky C. at 1:07 PM No comments:

A thorough and sincere look at the conference that was and hopefully will continue to be. Notice the mention of a representative from "The University of Texas." I'll take that upgrade, fo' sho'! ;)
Posted by Bucky C. at 6:40 PM No comments:

Just thought I'd share all the graphica goodness coming students' way here in the West Texas Town. This Summer I'm teaching YA Lit during the second Summer session.


I'm taking a cue from my colleague Keith Polette and "clustering" 10 graphic novels around 7 YA novels. The graphic novels include American Born Chinese; Deogratias: A Tale of Rwanda; Life Sucks (which I'm going to pair with Fat Vampire), Dawn Land, Bayou volumes 1 and 2; Yummy (which will be clustered with Monster); Refresh, Refresh (which will be clustered with Last Night I Sang to the Monster and other texts); Smile; and How I Made it to 18.


My Fall 2011 line-up looks like this: one section of English Laboratory, which will once again feature Ayers' To Teach graphic novel; one section of what was once called "Drama in the Classroom" but has, due partly to my efforts, been retooled as a "Multimodal and Hybrid Forms in ELA" course; and one section of Jewish American Literature in which I get to focus on the graphic novel.


Watchmen, The Tale of One Bad Rat, and The Absolute True Story of a Part-Time Indian are on tap for "Hybrid Forms."


It was tough to narrow down the reading list for Jewish American Literature. I finally told myself I can make assignments that will allow for students to flesh out areas we're not covering in the required reading. I hardly have any super hero stuff in there, for example, but I'll have suggested titles for additional graphic novel reviews and book reviews to extend our knowledge.

So, here's the list of titles that did make it. You'll see a clear emphasis on some "contemporary masters" in here: Make me a Woman, James Sturm's America, Unstable Molecules, Hereville, Need More Love, A.D.: New Orleans after the Deluge, Ghost World, the Quitter, Maus, In the Shadow of No Towers, Fagin the Jew, The Plot, and The Contract with God Trilogy.

That's mostly Sturm, Spiegelman, and Eisner, I know. Hard to apologize for that, though. Also, The Jewish Graphic Novel: Critical Approaches will be our key textbook, with outside readings from other texts and one assignment being reviewing another scholarly or pseudo-scholarly book dealing with judaica and comics.
Posted by Bucky C. at 5:35 PM 2 comments:

The New York Times gives the contemporary iteration of Marvel some love.
Posted by Bucky C. at 11:08 AM No comments:

Will that be in Slim, Colossus, Juggernaut, or Galactus, sir?

p.s. I hear you can order a Wolverine if you want just a little taste, but its not on the menu and you have to ask for it.
Posted by Bucky C. at 6:15 PM No comments:

Duncan the Wonder Dog, by Adam Hines. As the Beat reports:

"Named for the seminal woodcut artist who created some early American graphic novels, the prize is sponsored by the Penn State University Libraries and presented to the 'best graphic novel, fiction or non-fiction, published in the previous calendar year by a living U.S. citizen or resident.'”
Congrats to Adam! Looks like I gotta put another book on my must-read list!
Posted by Bucky C. at 11:18 AM No comments:

Ethan Heitner's "What Does a 'Failing School' Look Like?" page 1

I have no idea if this is the first in a series of pages or a one-off, but it's worth a look. Click the title to the post to see a comparison of several Queens, NY-based schools -- sharing the same building no less -- seeing differences in funding, etc.
Posted by Bucky C. at 11:16 AM No comments:

Great article here about First Second's scope, aims and history, in which it is revealed that American Born Chinese has sold about 200,000 copies in English and other cool tidbits are discussed. Congrats on the publisher of decent-to-excellent graphic novels on its pending 5-year anniversary!
Posted by Bucky C. at 11:03 AM No comments:

That's the New England Comics Arts in the Classroom Conference, ya'll! Woot! Woot!
Posted by Bucky C. at 11:59 AM No comments:

Thanks to Barry D for sharing this link and offering to skype with ENG 3327 next semester!
Posted by Bucky C. at 3:47 PM No comments:

You Know You Wish you Were Enrolled at UTEP Come Fall 2011! 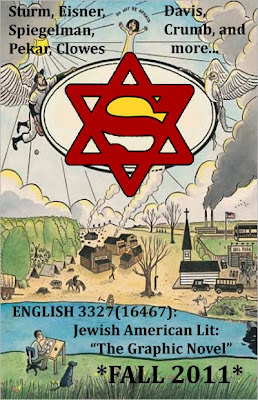 Update from The Comic Book Project

Press Release: It's official! The Comic Book Project has come to at least one school or library in every state across the US. From Hilo, Hawaii to Portland, Maine to Portland, Oregon to Miami, Florida, and everywhere in between. We'll soon feature a comic book club of the month to highlight all the creative work and literacy development. But we're not letting international borders stop us-- our latest club [is] in Mexico!
Posted by Bucky C. at 12:53 PM No comments:

Add "Motion Poster" to your list of hybrid forms

You know about motion comics, but now there's the motion poster! Click here to learn more about this artifact associated with the new Conan the Barbarian movie.
Posted by Bucky C. at 6:26 PM No comments:

If you're not facebook friends with the folks hocking the documentary Comic Book Literacy, you're missing out on tons of interesting links. It's like they have all day to comb the web to look for evidence to support their claims yet never bothered to give me a ring on the telly. ;)

Anyway, here's a link to an article from the North Bay Nugget detailing how Lynda Marshall uses comics to help teach canonical works like those from Shakespeare in here high school English classes at Widdifield Secondary School.

An excerpt from the article:

Students were sent on their Christmas break with the graphic novel version of Hamlet (which resembles a big comic book), as well as the original play.

"I told them to just read the graphic novel and we'd review the original play in class," Marshall said. "When they came back, they had read both. For the first time every student in the class understood the play, cover to cover."

There was also a big comics-and-literacy shindig at North Texas that featured a lot of good speakers. Apparently UNT gets it. Still, it might have been nice to get a call, but the UT system is different from the UNT system, so I can understand the homegrown pride.

But the student newspaper at UT-Arlington is getting in on the action. Here's a link to an article from The Shorthorn that covers the documentary that Texas-based Todd Kent is showing across the state currently. Here's another English teacher, this time at the college-level, talkin' graphica:

English assistant professor Carolyn Guertin uses comics in class to help her students create digital narratives. She believes comics should be taught to children because they help them understand information by using a more visual approach to presenting it.

“Comic books are the fastest-growing form of storytelling,” she said. “I think it’s really a good approach to making [information] understandable, and they’re fun. You can never beat the fun factor in learning. It’s very important to making it accessible.”

Finally, here's a link to a Youtube video featuring a discussion of the documentary after it had been screened.