Don Leibold, a colleague of mine and a contributor to Building Literacy Connections with Graphic Novels, is completing his masters thesis on comics and literacy and would love your help, if you're a comics and literacy-minded person. He's set up a very brief survey, and I encourage you to fill it out by clicking here and following the simple instructions.

I did and, upon completion, developed the super-human abilities to fly and type 300 words per minute. Nah, not really, but it was easy, painless, quick, and fun. Please help out Don by participating so he can inform more great S.equential A.rt N.arratives in E.ducation-related work.
Posted by Bucky C. at 12:23 AM No comments:

Thanks to Mike Rhode, who drew my attention to this article on the growing acceptance of comics as worthy of study. A Duke graduate student is quoted. Throw in the Harvard scholar from a recent PMLA article and it seems that we've got a case of the prestige going on. Despite the fact that other universities have offered courses on comics for years, there's just something about it that makes it "exciting and new" when we can attach an "Ivy" or "Ivyesque" to it. Frankly, I don't think comics need scholars from elite private schools to lend them legitimacy, but I suppose we take what we can get in the larger scheme of things. I'm certainly not knocking any current or future comics scholars from good universities (or bad ones either), I'm just saying the "news" here isn't as new as the story might lead one to believe.

Further, this "perpetual novelty" does hurt the field a bit, I think. What happens when this line of thinking spins circles without advancing is that young scholars repeatedly feel like they've "discovered" comics scholarship for the first time, and that they're among the early academics to be in on the hot, new secret. I've been there myself. This can work as a negative, despite the excitement and enthusiasm it engenders, because it has the potential to block collaboration and sharing among scholars. Too many young comics scholars seem to feel a sense of ownership over the realm of comics scholarship, like they're hoarding a secret and must keep it to themselves so that they may eventually enlighten academia with their comic book scholarship discoveries. "Thanks, Captain Columbus, but the continent was already there and known to many before you mistook it for India."

Thank goodness there are groups and conferences out there that can help comics scholars realize they're part of something with history and legacy -- but if one is so closed off in his/her excitement and feelings of ownership, one may never seek out such entities. I've seen it happen with many undergraduates and graduate students. They come to me seeking advice and resources, only to really want their own narrowed list of weblinks, etc., that make up their knowledge base affirmed. Acknowledging that other people have been studying comics for years, afterall, means that that sense of belonging must move to a sense of sharing. Like I said, I've been there myself, so I'm sympathetic, if not a little weary of the phenomena.

And then there's this story about "tweens" (worst word ever. When I was growing up, a tween was the fleshy space between one's asshole and his/her genitalia. "Tween" and "Tweener" will always hold that ass-ociation for me. Why not just call pre-teens "The Walking Taint" or "Yon Newly Stubbly Choded Ones"?) flocking to graphic novels. Scott McCloud is quoted and the whole "comics vs. novel" thing is rehashed.

Oh man. I just read over this post. Am I becoming a curmudgeon already?? At the ripe age of 30-something? "Gasp!" he said, as he felt a cold, desperate sense of his own wizened, hoary morality creep up his spine, from deep down in his twee -- Nah, too easy. ;)
Posted by Bucky C. at 11:52 PM No comments:

The largest comic book convention in the nation had 125,000 visitors this past week, equalling last year's attendance numbers simply because capacity was reached and the event holders couldn't let anyone else in. Read more here. 125,000. Let that sink in for a moment.
Posted by Bucky C. at 11:49 PM No comments:

ICV2 reports that a comic book publisher will be selling books based on the two presidential candidates this October. They can be purchased separately for partisan audiences, or as a 2-in-1 flip book for those seeking real fair and balanced representation.
I haven't seen any previews besides the cover images that ICV2 has shared, but what a great idea, assuming it comes to fruition. And, certainly, this would be a nice way to introduce students to the candidates and even extend studies into visual/critical literacy terrain directly by asking questions like "What does the artist's interpretation of this character possibly suggest, if anything?" and "Based on our own research on the candidates now that we've read the books, are they informative enough to be useful to an undecided voter?" or "Do you think the candidates will support these comics now that they're readily available? Why or why not?"
I for one, think the cover image of McCain shows a somewhat scary grin. Not sure if that's intentional or not....

Teachers and Writers Magazine covers Comics in the Classroom!

The Summer 2008 edition of Teachers & Writers (39.4) is all about using comics in the classroom to get students composing and thinking about literature, from authentic biography to poetry.

With a cover from Josh Neufeld that I hope is autobiographical detailing a young man crafting a comic on Frederick Douglas as his teacher tells the class about the 19th century leader, getting "caught" doing so by said teacher, and then praised by her once she sees his work, this nonprofit publication out of NYC would be irresponsible not to showcase the work of Columbia University Teacher's College senior researcher, Michael Bitz, famous for The Comic Book Project. Bitz uses straight-up English Language Arts terminology in his lead article,"A Rare Bridge," and also gives pointers for how to start a comics club in your school.

Francoise Mouly,Art Spiegelman's wife, who has been doing quite a bit of publishing in kids comics, is interviewed, and there are articles on teaching poetry comics from Dave Morice and other articles -- some even in sequential art format -- from Susan Karwoska, Youme Landrowe, Sara Wilson, and more. As seems a requirement for these sort of themed issues, the last few pages share some excellent, if not rather choosy, resources for further consideration.

My only real complaint is that I didn't get any love in the pub! But my ego aside (though it does get aggravating to see that so many of us are starting to say the same things, but we don't seem as aware of each other as we ought to be), for $5, this is an excellent, current resource that shows more and more k-12 educators are (re)discovering the pedagogical potential of sequential art narratives!
For more information of Teachers & Writers, including contact information so you can order a copy of volume 39.4, click here.
Posted by Bucky C. at 10:43 PM No comments:

The Graphic Life of Nelson Mandela

ICV2 reports the former polital prisoner is getting the sequential art treatment in an upcoming graphic novel! Excellent!!
Posted by Bucky C. at 8:42 PM No comments:

So there's no reason for me to explicate the now infamous Obamas The New Yorker cover. The editor in charge of making the call to run it has explained it perfectly in the CNN link I've inserted in the title of this post.

I'm embarrassed that too many Americans are too stupid to see the cover for what it is (satire) and that uber-liberals and the self-rightious are crying foul over the image even when they recognize it as satire. Not that the cover pokes fun of the Obamas -- it pokes fun of many Americans' fears about what they seem to represent (but do not) -- but do we want a president we can't poke fun of? I don't. Satire goes too far when it examines African American presidential candidates? Is that the real issue here? Feh! Once again we have folks too quick to point fingers. Cartooning and lampooning have a rich history of making social and political statements via satire, and the day the USA imposes too much restriction over satire will be the day Democracy died (again).

I haven't expressed my political leaning in this blog, but I will say I was pretty excited about that Alex Ross painting that was making the rounds a few weeks ago. And, with that being said, I have no problem with the cover and am proud of the magazine for running it. Controversy and satire should lead to intelligent discussion, and intelligent discussion should lead to better insight and understanding, and better insight and understanding is just another way of looking at being better educated.

So that's more a rant than an explication.
Posted by Bucky C. at 10:15 AM No comments:

....At least that's what some thought in the 1940s and 50s, spurred by Freddy Wertham's case "research" with kids and the worries of librarians, some educators, and parents. As the recent novel The Ten Cent Plague has informed the public at large and reminded comics historians, the senate even got involved once the media helped turn the comic book scare into something akin to Big Tobacco (except tobacco really can make you violent and gay. OK, OK, I made that up. The last part. Ever been around someone going through nicotine withdrawals, though?).

Jamie Coville has put together a website dedicated to sharing some of the testimony from the hearings, the subsequent self-regulating code that comics publishers created, and more.

Visit http://www.thecomicbooks.com/ to read through some very interesting testimony from some of the leaders in comics of the 1950s. Who sold out whom? What were the senate's summary remarks once all was said and done? Which pilgrim was ultimately sentenced to a death by crushing via large stone? Find out most of that information at Coville's site.

It's worth noting that many educators and education scholars had been working to disprove Wertham's claims as early as the 1940s. As I've said elsewhere, though, their work was published in academic journals, whereas the popular media got wind of the comics scare and helped publicize it via popular magazines and newspapers. Which writings do you think the public accessed the most and were most influenced by?

(Thanks to Lou N. for bringing this website to my attention!)
Posted by Bucky C. at 9:34 PM No comments: 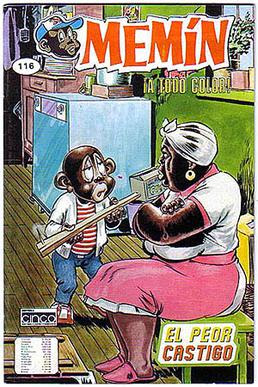 A popular Mexican cartoon character is drawing the ire of some American residents who have seen his countenance on comic books in their local stores, due to his appearance. CNN covers the story here. Some are saying the stories of the character taught them life lessons. Others feel the exaggerated features of the character -- reminiscent of old-timey depictions of African Americans (though the character is Cuban and Mexican in heritage) -- present images of insensitivity. Memin Pinguin, as he is known, is one in a long line of lovable scamp characters that have often inhabited comic strips and comic books and usually have represented stereotypical qualities based on notions of race, class or gender.

His appearance in U.S. stores is a contact zone engaging, border-crossing hot button topic to be sure!
Posted by Bucky C. at 4:38 PM 4 comments: