See Economix Comix creator Mike Goodwin's comic on the in-process, secretive TransPacific Free Trade Agreement and why the US's corporate interests are pressuring politicians to agree to some things that might help line the pockets of the 1% but might prove unhelpful to the rest of us, like most policies supported by our two-party system and their profiteering puppet masters.

OK, maybe reading the comic has me cynical (Me?? No....!). Read for yourself and decide what actions you'd like to take. Here's the link! 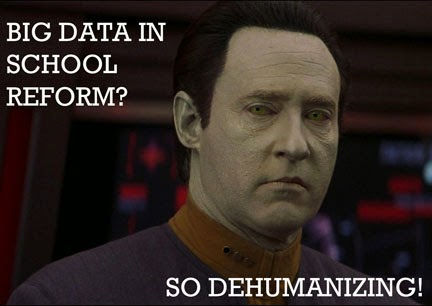 Please click here to read an excellent editorial from renowned English Education Professor Peter Smagorinsky in which he discusses what the new landscape of English teaching entails for a beginning teacher in the age of big data, where the whole child can be reduced to a series of dots on a page. One point made:

"This process of dehumanizing students and teachers also reduces them only to what is convenient about them to justify policy decisions."

Personally, I think Star Trek television shows and comics had a much better plan: Data as humanizing factor.

Education Reformers: The New Segregationists and the Assimilationist Ethic

What more proof do you need that the current rash of corporate education reforms is designed to destroy public education than the fact that Bill Gates and others supporting the Common Core State Standards also push for charter schools? If the testing supposedly accompanying CCSS reveals nationally what it has revealed in New York -- mainly that students fail these tests at higher rates than they passed others -- the big "reveal" will be that Gates and other reformers double dipping in public education and pseudo-private charters have custom-created a market, with our children as the victims and the public as the pawns.

"Failing" public schools with faculty forced to meet standards that are illogical and not developmentally appropriate -- especially in the delicate early elementary grades -- are, essentially, in a double-bind such that they exacerbate their own demise. Stakeholders who see schools as failing may be more apt to seek alternatives. So, public schools assist reformers like Gates by accepting and implementing  models designed to decenter them from their "monolopy" (rather than what I see as "the right") that is public education.

More charters open, maybe even with public support. They are less regulated (if regulated at all) than public schools, so they get to pick and choose who they accept. Even if charter leaders use a lottery system to pick students at random, they can implement policies and practices to drive out students who are difficult to serve or do not measure up somehow. As well, they can decide where and when the lottery is held, possibly limiting access to potential "undesirables." Where to send the kids who won't illustrate excellence and hold the charter school's scores down? Back to public schools, where the better-performing and less-needy students may have been skimmed from the enrollment already and where they may once again act as illustrators of the schools' "failing" based on tools designed to create the market for the charters in the first place.

As more public schools fail, new charters move in. Perhaps they focus on special populations and keep class sizes small. Or, perhaps they plop kids in front of computers and beside unqualified, unlicensed teachers and call it education. Charter operators get to define their own definitions of success, which may or may not be comparable with the definitions foisted/self-imposed upon public schools.

Charters under-serve the most vulnerable students in public schools. Generally, they do not serve special needs students or those designated as ESL/ELL. These students may also be the ones who, regardless of how much work is being done to assist them, can't have true growth measured via CCSS-model standardized tests but have to take them anyway. While there are charters which exist to serve special needs students only, they do not constitute the rule but rather the exception.

Here is the Gates model to school reform: Segregate and Conquer.  It is a model used to some degree by most corporate-centric school reformers:

1. Claim schools are failing.
2. Use influence to craft and implement curricular standards designed to further prove the claim (define the problem and create the tools to prove the problem you defined).
3. While public schools are exacerbating their own demise, build up the new resources such that once the claim is "proven," you control the alternative market.
4. More schools "fail" based on the definition you asserted and states accepted.
5. Advertise your ready charters as better alternatives.
6. Skim least-risky students from public schools to ensure your success in charters.
7. Watch as public schools do worse based on remaining students who are less capable of succeeding under your imposed and accepted definitions.
8. Offer more alternatives for students in those schools, alternatives you control.
9. Rinse, wash, and repeat.

Somewhere in there is work that convinces politicians that this new free market education system will be good for the economy overall, which may be the only thing politicians think the public cares about anyway or see as that which will best help them get re-elected. Convince the power politicos that opening up the new market will improve the bottom line regardless of the social carnage or the rejiggering of values associated with the public good and the right of a free public education. Add a president and his partners who make accepting the CCSS mandatory to even be considered for a new pool of government funds at a time when states are reeling to make ends meet -- a "thank you" gesture to some of the president's earliest backers --  and you have your new pauperizing process.

In the meantime, as the corporate clock-maker gods sit back and watch the system play out as devised but under false aegises of public demand and public accountability, the divide between the have's and have-not's grows. This too is part of the overall economic reform system, but with children as the central victims. Other people's kids: the easiest gloss.  The goal is reform for profit, not reform for improvement. Certainly not for equity.

All stakeholders in this nation, especially teachers, teacher educators, and their professional organizations, are in an exigency where they may feel  they must assimilate or die.

I propose a different possibility: Assimilate and die.

I have to teach my students how to deal with CCSS. I try to counter this by making sure they know  their daily goals and objectives are not synonymous with meeting standards. The phrase "teach the standards" keeps popping up in high-profile places, making the distinction between goal-oriented teaching and standards-based teaching harder to make to young people who know the jobs they'll seek may require an assimilationist attitude, but I attempt to get my students to see the standards as a tool to meet the needs of their students and to get them to see teaching and learning as a situation in which the learner comes first and standards are at least secondary to daily and annual teaching goals.

When I discuss the CCSS with my students, we read works offering support for them and works detailing problematics.  I chant the mantras, "You don't work for the standards; make the standards work for you and your students" and "Use the tool of standards; don't be the tool of standards," but my efforts feel less and less revolutionary as I accept the perceived fact that I must accept what I want to disavow. I'm assimilating out of perceived necessity, but my soul and conscience are dying.

I'm not sure what I do is near enough. I've engaged in "Facebook advocacy" by sharing resources with my network. I've joined the Badass Teachers (BATS) and The Network for Public Education (NPE).  I try to follow those who are speaking out about these rhee-forms or deforms or whatever the reactionist phrase de jour may be, but perhaps I need to be more public in my worries, writing my elected officials and working to influence which ones find themselves with power.

But as a public employee at what is essentially a government-sponsored institution, do I put what little privilege I have on the line by speaking out?

If I feel this way as a visiting professor not yet on the tenure track, how do my TT colleagues feel and why aren't they speaking out more too or taking actions to influence their national organizations?

Many of us in teacher education have much to gain in terms of professional comfort by continuing to give our money to the organizations that have yet to take a hard stand against the reform movement. We have what feels to us much to lose by speaking out. And our tenured professors? Perhaps they're just too comfortable overall, too removed from the pressures of failure that the New Segregationist movement have spawned. They're the success stories and power-players of the profession, after all.

I can conjecture at best regarding these questions, and there are folks fighting the good fight and embracing the consequences, I know; but let it be said: the New Segregationist Movement, just as it feeds on double-binds regarding K-12 schools and forced acts of desperation from state leaders,  feeds on contemporary notions of success and visibility and viability accepted by those in the field of teacher education, binding professionals who should know better to systems of self-preservation and organizations that may no longer have all of America's children at the center of their values. 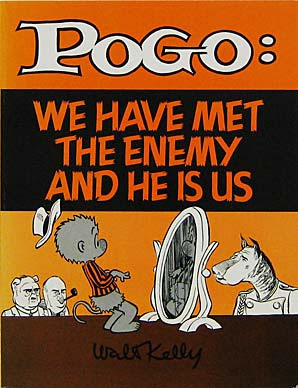 I know I'm part of the problem. I can't rebel against the system such that I can ignore the presence of CCSS and other reforms, and I'd prefer not to scare my most-promising 22-year-olds out of teaching, hoping instead maybe they'll be able to fix this mess the rest of us, those too far in even as we scream to get out, make and remake even as we resist from our precarious perches with just enough privilege to placate us from taking stronger actions against our oppressors, who, to a degree, are us by design.

In short, any battle against the New Segregationists is a battle against forces stronger than any one of us, forces that can control our comfort and careers and the definitions of our profession and our viability within it, and against forces that have ensured we have to fight our own demons before we can tackle the new quagmire they continue to create as we struggle under the forks of their wealth, influence, and power. The enemy is us, and them, and the us they've helped us create. The right to a quality public education for every child and to the kinds of reforms that are necessary to make that a reality are at stake.

Make no mistake about it: "Public education" is an entity being reduced, redefined and devalued every day the public school reformers are the same people supporting public school alternatives like charters, a key cog in creating the machinery of their New (true) Monopoly of K-12 education (not that they're stopping there).