A second state branch of NCTE has asked me to be a special speaker at their state conference. Iowa contacted me about being a keynote speaker a few weeks ago. Now representatives of New Hampshire's affiliate, NHCTE, have asked me to present two sessions at their Spring get-together held in Manchester, NH. As I have friends who are into the comic book scene in New Hampshire and had my edited collection mentioned in a recent policy document from the NH Department of Education, I am very excited about this trip. Plus, I've always wanted to visit the state. Heck, I wouldn't mind living there, if any New England colleges or universities are reading! ;)
Posted by Bucky C. at 12:03 PM No comments: 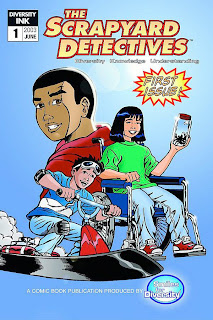 Comic Book Resources has posted an interview with Bill Galvin,the creator of "The Scrapyard Detectives," a comic created with the support of The Diversity Foundation to explicitly illustrate examples of ethnic diversity and community teamwork. Here's CBR staffer Rick Offenberger's hook:
Everyone wants to change the world. However, few of us do anything about it. Bill Galvan is trying; he joined the non-profit organization The Diversity Foundation to do just that. Bill has created his own group of teen adventures in the comics "The Scrapyard Detectives," a group who solve mysteries while demonstrating the value of accepting ethnic and cultural differences. But this isn't a comic you'll likely see in your local comic shop. Galvan's creation is given out free to schools and libraries and so far this effort has topped 70,000 copies... Read more here.
Diversity in comics is nothing new. Pick up any copy of X-Men from Giant-Sized #1 on and you'll see a multicultural group of heroes trying to make things work. They're led by a man in a wheelchair. They come from different countries and represent various ethnicities. However, Galvin's comic seems to make the message of cooperation much more overt, which might be what some readers need, so more power to him and his cast of characters. Plus, the series actually has an education professor on board as an active advisor and comes with lesson plans focusing on vocabulary and comprehension.
Posted by Bucky C. at 10:20 AM No comments:

I'm herein officially starting something I'm calling "The Testify Project." I'd like to invite you to reply to this posting by testifying to how comics influenced you as a reader when you were in your formative or school-age years. Was the first book you read a graphic novel? Did Crisis on Infinite Earths make you a lifelong reader?
I've posted a couple of my own testimonial-type stories, and I invite you to help me show the world the power of sequential art by posting yours too as a comment to this thread !
Posted by Bucky C. at 6:57 PM 8 comments:

Thanks to M. Hollman for sending me this link to another graphic novel publishing company putting its own spin on the "classics illustrated" approach to sequential art. Self Made Hero publishes Manga versions of Shakespeare plays and also has some other literary adaptions lined up. Guess who is on the list? Poe and his "nevermore-ing" raven, of course! With the likes of Graphix and Marvel and :01 (First Second) and others tapping into the educational graphic novel market, surely more and more teachers will take note of the resources becoming "ever-more" available to them.
Posted by Bucky C. at 6:42 PM No comments:

Many adults and educators, myself included, are a little wary of Manga, Japanese import comics or graphic novels or those works of sequential art done in the Japanese style. But, young people in America are devouring them, it seems, boys and girls, so it behooves print literacy traditionalists and American comics traditionalists to learn about them.
Wired Magazine has offered up an excellent primer on Manga's definition, history, formal properties, and popularity. Just click the title of this post before Astro Boy (or should I call him "Mighty Atom?") flies off the page, and you can read and download a Manga primer written in a Manga style!
**Thanks to Adam C. for sending me the link!
Posted by Bucky C. at 9:59 AM No comments: 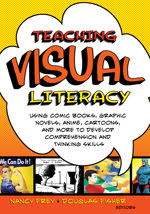 Corwin Press has posted a cover image for the upcoming collection Teaching Visual Literacy Using Comic Books, Graphic Novels, Anime, Cartoons, and More to Develop Comprehension and Thinking Skills! Edited by Nancy Frey and Douglas Fisher and including an essay by yours truly, this book is going to be a great addition to the field once it hits the shelves in early 2008. I'll post a larger cover image when I can get one.

Suggesting that his school administration completely sold him out while also saying that he made an honest mistake in giving a student Daniel Clowes' Eightball #22 to read, former Guilford High School (Connecticut) English Teacher Nate Fisher is finally speaking about the incident that garnered national attention.

I can't help but think what graphic novels might be in his class if he had been able to take a pedagogically-centered graphic novel course in college, though. If he'd been a student in my class, he probably wouldn't have read Eightball, but he would have read Will Eisner's A Contract With God and Brian K. Vaughn's Pride of Baghdad. He would have learned not to shy away from challenging material and how to protect himself and his students' intellectual freedoms as well.

Perhaps teacher educators need to give the graphic novel more attention in their methods and YA lit classes. I know of many college-level graphic novel classes, but I know of no graphic novel-themed education classes besides the one I taught last summer and may teach again this summer. I wonder if Mr. Fisher would have taken such a class, and if he had, if he would have still included the Clowes book in his classroom...

At any rate, here's hoping that Mr. Fisher is able to find employment as a teacher once again and also that his experience with overzealous parents and sadly typical administrators and central office personnel hasn't turned him off of graphic novels for good.
Posted by Bucky C. at 3:31 PM 3 comments:

The Iowa Council of Teachers of English has asked me to be a keynote speaker at their 2008 convention! Wow! It's a real honor, especially since John Golden will be another keynote presenter. ICTE and I are in talks right now, so I'll post more later, but how fun to have this to look forward to, and how exciting that ICTE is this interested in using sequential art narratives in the classroom!!!! Having spent so much time in Mississippi lately, it was refreshing to see folks receptive to my work and ideas.
Posted by Bucky C. at 10:39 PM 2 comments: