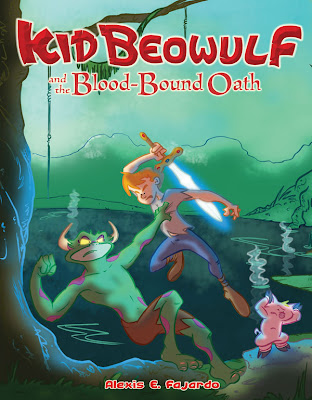 Alexis E. Fajardo, illustrator at the famed Charles M. Schulz studio, is on a mission to retell the epic tales of civilization. His main characters as he begins this quest? Beowulf and Grendel, who are revealed to be tied together more closely than anyone could imagine in the book to start the series of revisionist tales, Kid Beowulf and the Blood-Bound Oath.

As it turns out, the story behind Beowulf and his foes has been a misunderstanding, a twisting of the truth over thousands of years. That's what you get when you're relying on an oral tradition, I guess. In Fajardo's "truth," the dragon, Grendel's mom (Gertrude), Beowulf and Hrothgar are all blood relatives after a power-hungry Hrothgar makes a deal with the dragon to ensure that he'll rule his father's kingdom someday. Of course, no one wants anyone else to know who is related to whom, so the story is full of political intrigue, manipulation, and conflict. Add to the equation more macro-level politics as diverse bands squabble with other tribes over land, food, women, and loyalty, and the plot gets thick pretty quickly.

There is no shortage of Beowulf-inspired comic adaptations on the market right now. What sets this title apart is that it works from a level "one up" from the bulk of its contemporaries. It does not seek a simple retelling of the Beowulf story so that struggling readers can gain access to the story through alternate or complementary means; it retells via a revisioning of the story, taking classic characters and timeless themes and revamping them to craft a completely new and exciting narrative that is inspired by the original but by no means bound by it, unlike how Hrothgar is bound to his oath, which acts the impetus for much of the destruction and dissonance in the title.

It builds interest in the original text by honoring it but playing with it; it builds student motivation to read the original without necessarily having that as its ultimate goal. Those who read Fajardo's revisionist romp may be moved to the canonical poem Beowulf or John Gardner's Grendel because they've developed a love for the characters as they have been more fully examined in the graphic novel. Surely surprises await those who have never read the poem when they do so, and I'll bet that when those readers get to certain spots often read as victorious, they'll have a deeper reaction than most readers who see certain de-limbings and dragon-slaying as par for the course for the epic form.

Marketed to readers in grades 9 and up, Kid Beowulf and the Blood-Bound Oath is a fun, character-building extension of the Beowulf mythos and illustrates how great art continues to inspire other great art from generation to generation, century to century.